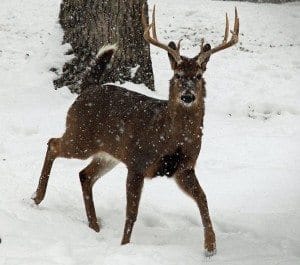 With Thanksgiving just a day away, it bears repeating – cars and deer can be a lethal combination. Deer migration and mating season generally runs from October through December, and causes a dramatic increase in the movement of the deer population. As a result, more deer-vehicle collisions occur in this period than at any other time of year, so drivers need to be especially cautious, according to the Insurance Information Institute.

The Insurance Institute for Highway Safety estimates that there are more than 1.5 million deer-vehicle collisions each year, resulting in 150 occupant deaths, tens of thousands of injuries and over $1 billion in vehicle damage. The average claim for collision damage is about $3,000, with costs varying depending on the type of vehicle and severity of damage; claims involving medical payments can add thousands of dollars, according to the I.I.I.

“As our wildlife habitat continues to shrink and our traffic volume grows, accidents with deer are likely to increase and these mishaps can cause a great deal of damage. During this fall season, I would urge people to be a bit more vigilant when driving,” says Andrew McCabe of McCabe Group Insurance.

Not only is urban sprawl displacing deer from their natural habitat, but the deer population is also growing. Many of these deer find their way onto highways and into suburban neighborhoods, especially during deer season.

Fortunately, there are steps you can take to decrease the likelihood of being involved in a deer-vehicle collision. The following facts can be helpful in avoiding deer-related collisions:

In the event your vehicle strikes a deer, try to avoid going near or touching the animal. A frightened and wounded deer can hurt you or further injure itself. If the deer is blocking the roadway and poses a danger to other motorists, you should call the police immediately.

For more information on this and other safety topics, contact McCabe Group at 414-326-9337.

AS
The staff has always come to my aid no matter the circumstances.Anna S.
AC
Makes the decision of what insurance to use very easy. Definitely recommend.Amanda C.
SG
This agency provides fast and affordable coverage.Samantha G.
BE
Very helpful and responsive team.Boris E.
BM
The service is spot-on and I would recommend to anyone looking...Brant M.
B
They provide excellent service and answers my questions on my policy promptly.Bert
AM
...process went smooth and the McCabe Agency was there every step of the way!Angela M.
PN
...a pleasure to have something as complicated as insurance made so easy.Paul N.
SC
Best insurance broker I have ever dealt with.Steve C.
MR
Michael R.
See All ReviewsSee All Reviews